Sometimes we write ’em and sometimes they write themselves. Thanks a bunch to the boater (who asked to remain anonymous) who is sharing this real life boating story with the intention that others won’t EVER have the same problem….

OK, here is a good or bad (depending on whether or not you are ME), cautionary tale regarding checking your engine room before you take the boat out. Religiously.  Every time.  Edit it, use it, story and pictures as you wish but leave me and my name out of it! Feel stupid enough as it is and don’t need any help in that area!

Decided to install a Reverso oil/fluid change pump on my boat.  Not a huge project but one that stretched out for a few weekends due to time and figuring things out.  I got the pump mounted in a good place, in front of and below my generator.  While I was sitting there patting myself on the back I thought that, even though the hoses were not hooked up, it would be a good time to make up the power connection.  All of the wiring and tools were there next to me.  I had decided to just use wiring with alligator clips that I could hook up when needed rather than hard wire it to a breaker and switch somewhere.  I could store it on or next to the pump.  Hard wiring seemed like overkill for the limited use it will get.  Actually the whole thing is overkill but that’s another story.  So, I figured out a good length cut the wires and crimped the clips.  Did not splice to the wires on the pump yet.  Would wait until it was all finished. So I rolled up the wiring and put it on top of the generator for the time being.  Went about my business doing this and that, as I always do I checked oil and trans fluid levels, coolant, looked around, picked up and put away the tools I was using and went home.

The next day we had family and grandkids coming to go out on the boat.  I got there a little late, helped wife with food/ice/drinks and then family arrived early eager to go out. So rather than move the groceries and things off the rug covering the engine room hatch and go down for a last engine room check (I had just done it 18 hours earlier right?) I started up, checked exhaust, dropped the lines and off we go.  Little hot that day and had a small baby on board so I started up the generator for some A/C.  Anchored out, played in the dinghy, ate, life was good.  When we pulled anchor I felt something odd about the port transmission shifting.  Just a little something odd but not much. Still relatively new to the boat so maybe my imagination.  As well pulled out into the ICW it seemed fine and stayed that way until we got back to the marina entrance which requires a hard turn to port to get in. When I did so I put the port engine in reverse to help with the turn. No turn. No nothing. Forward or reverse.  Managed to back out somehow and dropped anchor away from the entrance.  Went to check engine room and noticed on the way down that the AC was no longer on for some reason.  Went to engine room to see if there was anything amiss.  There was.

The wiring harness I made up (forgotten about and on top of the generator) had vibrated off the generator and on to the port shaft and coupler.  The revolving shaft coiled the wiring around the shaft and pulled it into the tranny seal.  In doing so it spun the alligator clips around and around and one or both caught the A/C cabling as well as wires powering my 110v outlets.  What fluid wasn’t flung all over was sitting in the engine oil pan.  A mess.  Here are a couple of pictures of the transmission.  Wish I had some of the whole scene when I found it but my mind wasn’t on taking pictures! 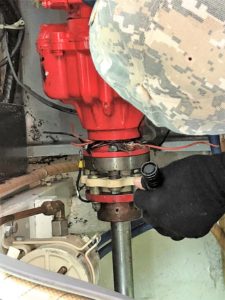 End of the story was $1,000 transmission repair and a $600 electrical invoice.  The good news is that I dodged a bullet with the transmission as inspection showed it was unharmed and good to go after a new seal install.

Lesson? Actually two. First, never leave anything in the engine room even if in the middle of a job. Put things away completely and take them out when you come back to finish.  Second, duh, inspect your engine room every time you go out.  You know, just like you told us a dozen times in your Introduction to Boat Systems seminar.

Great Advice while on a friend’s boat.

Ask Captain Chris While on a friend’s boat, this former student encountered a problem. Fortunately he remembered our tag line Ask Captain Chris. So he scrolled through his phone, found our last newsletter and gave […]

New Training Videos New Training videos from Ask Captain Chris are now available on Vimeo. Our Vimeo channel offers an online way to rent or purchase some great educational tips for new boaters. You will […]

What’s On This Engine?

No cheating! Look over the photo of this engine with the numbers on it. See how many items you can describe and really understand they function without reading the list below. […]

The Great Loop Side Trip